Roble Negro coffee comes from producer Jorge Vasquéz. His coffee farm, Finca Cedral Alto, in the town of Aserrí in Costa Rica’s Central Valley is about 45 minutes outside of the capital of San Jose.

The name Roble Negro means black oak and Cedral Alto means high cedar grove. These names indicate the importance of trees, forestation, and environmental preservation to Jorge and his coffee production. Cedral Alto is 22.5 hectares, with 12 hectares of primary forest, 6.5 hectares of reforestation and pasture land, and 3 hectares of coffee cultivation. The farm is filled with natural springs and freshwater sources, which the forested areas help protect and keep clean, and is situated at the transition between the Pacific side of the country and the Central Valley, spanning from 1750 to 2000 meters above sea level.

Jorge grew up playing soccer with his cousins on the farms around Aserrí where their parents worked picking coffee. He graduated from college with a degree in accounting and worked for Costa Rica’s Banco Nacional for 21 years, serving as a branch manager for the last 11. Today, Jorge has a recycling company, Compañía de Reciclaje Ecológico, which he founded to respond to the country’s pollution levels and to further his own belief in taking care of the natural world. The company has 14 employees, creates another 20 indirect jobs, and annually processes 2,000 tonnes of materials like cardboard, paper, wood, plastics, metals, and more.

Jorge bought Finca El Cedral in 2007 from Don Fernando Monge, who inherited it from his father Don Adan Monge. The Monge family owned the farm for 50 years and before that the property belonged to the Rojas family, a major coffee producing entity in the area during the twentieth century. When Jorge acquired the farm, one of his first concerns was to protect the six water sources on the property, which form the beginning of the Rio Jorco river and serve as drinking water aquifers for the nearby towns of Cedral Abajo, Vuelta de Jorco, and Acosta as well as irrigation sources for surrounding farms. There are many stunning waterfalls on the property that remind of the beauty and power of freshwater as necessary to people, plants, animals, and agriculture.

The primary forest and secondary forests on Cedral Alto are filled with many tree species and native plants like orchids, bromeliads, and epiphytes and are also home to many species of wildlife. The forests on the farm include oak, cedar, fig, avocado, guava, and poro trees and Finca Cedral Alto has 600 cypress trees planted as wind breaks to protect oak and cedar trees recently planted  for reforestation. There is as much diversity of fauna as flora and the rainforests create habitats for oncilla tiger cats, spotted pacas, armadillos, coyotes, squirrels, white nosed coatis, racoons, mountain lions, falcons, hawks, parrots, doves, snakes, lizards, frogs, and many other mammals, birds, and reptiles.

Fruit trees planted in between the coffee trees include orange, peach, sweet lemon, banana, plantain, soursop, and avocado; they serve as a food source for both people and animals. Currently the farm cultivates Red and Yellow Catuai and has a nursery of seedlings of another “criollo” variety collected from seeds on trees that survived from more than 50 years ago when it was the main cultivated variety. New seedlings are planted at the beginning of the rainy season, usually in May and June. These young plants require extensive care during their first year as they form their root systems and quickly develop foliage for the transition from protected nurseries to open fields. Climate change has upended this process, however, and split the rainy season with increases in dry months and an overall decrease in rain. This changes both the plants’ development and producers ways of working with them.

Cedral Alto’s hectares of pastures are home to 10 head of cattle that produce both milk and meat, which are alternative sources of income as well as sources of food for the farm. Two full time employees maintain the farm and Jorge refinished the house on the property for them to live in. They complete all weed removal by hand and the farm does not apply herbicides. Roble Negro avoids the use of agrichemicals and instead uses natural microorganisms harvested from the humus layer of the forest floor to create non-toxic applications to control for common plagues like leaf rust and insects. Similarly natural applications are made to the soil to facilitate nutrient absorption. There are three yearly applications of nitrogen-based fertilizer to help the plant grow, mature, and flower adequately. Pruning and preventative herbicide/insecticide applications are also done by hand and use the “melasa” byproduct of a sugarcane mill as a natural application medium.

2020 was the first harvest Roble Negro processed their coffee in their own coffee at their wet mill. In the post harvest stages, Roble Negro uses Honey and Natural and careful Washed processing to avoid contaminating water sources. After being removed from the coffee seed, coffee cherry skins are reincorporated back into the soil as a natural fertilizer. Coffee is dried in the sun to both elevate its quality and make use of the natural energy source. Jorge’s cousins Alex and Daniela volunteer to help him market his coffee and pursue his dream of finding the perfect home for the very special coffee from Roble Negro. In recent years, the farm has also become a local hub for community sports, events, and eco-tourism. 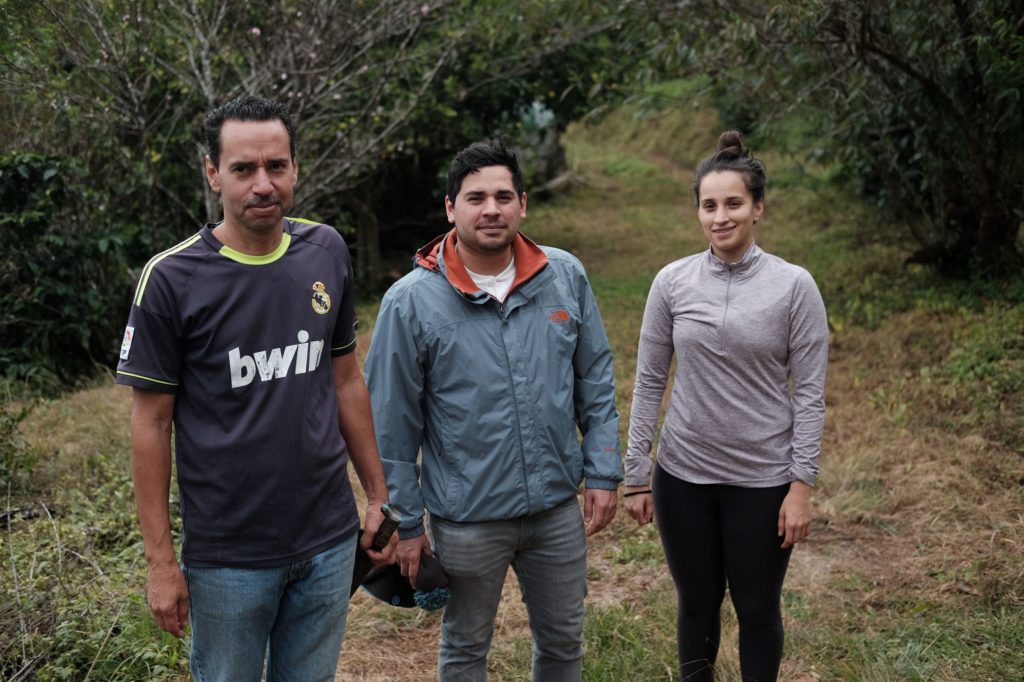 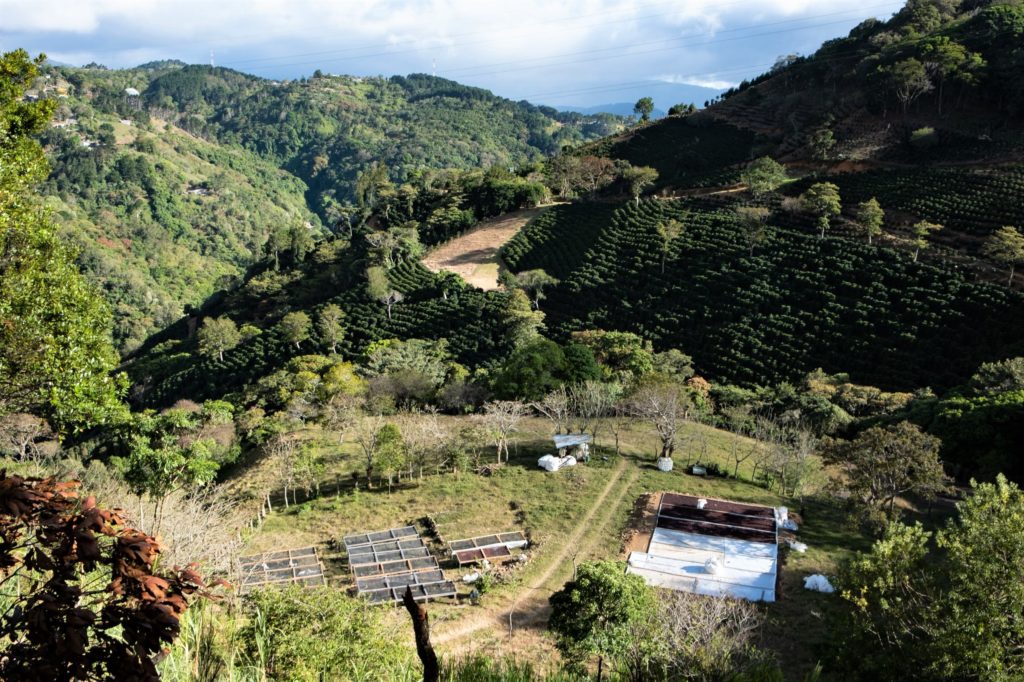 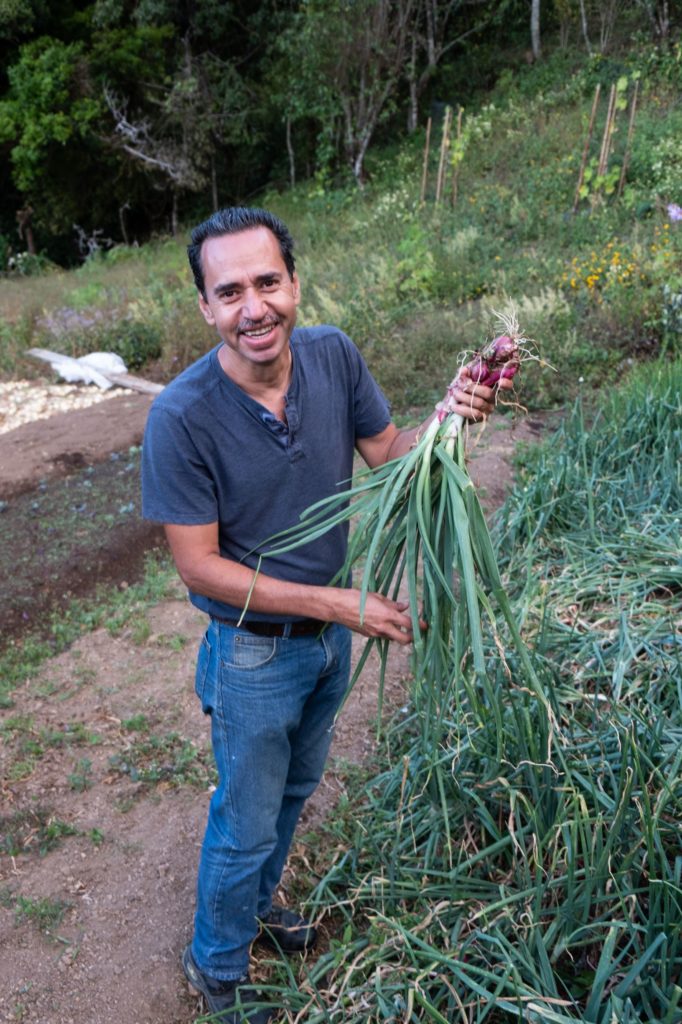 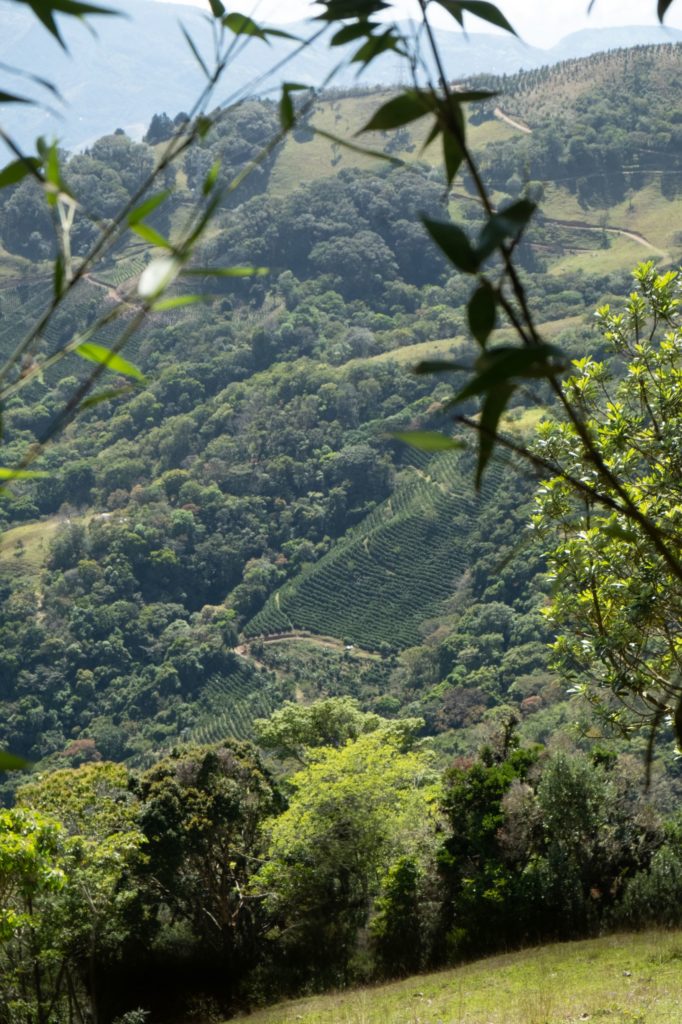 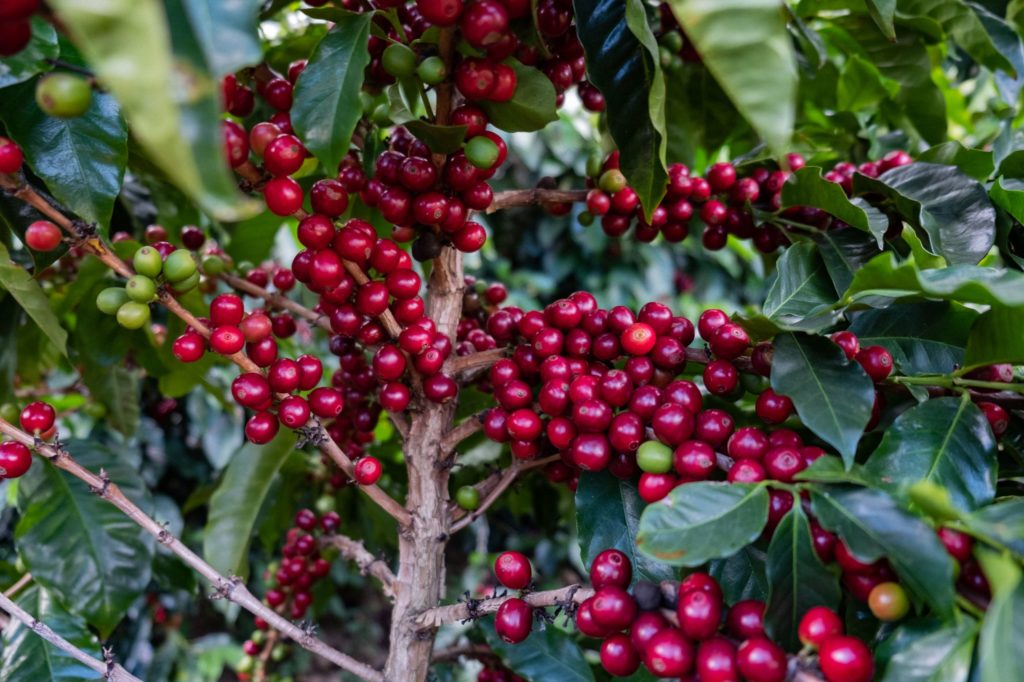 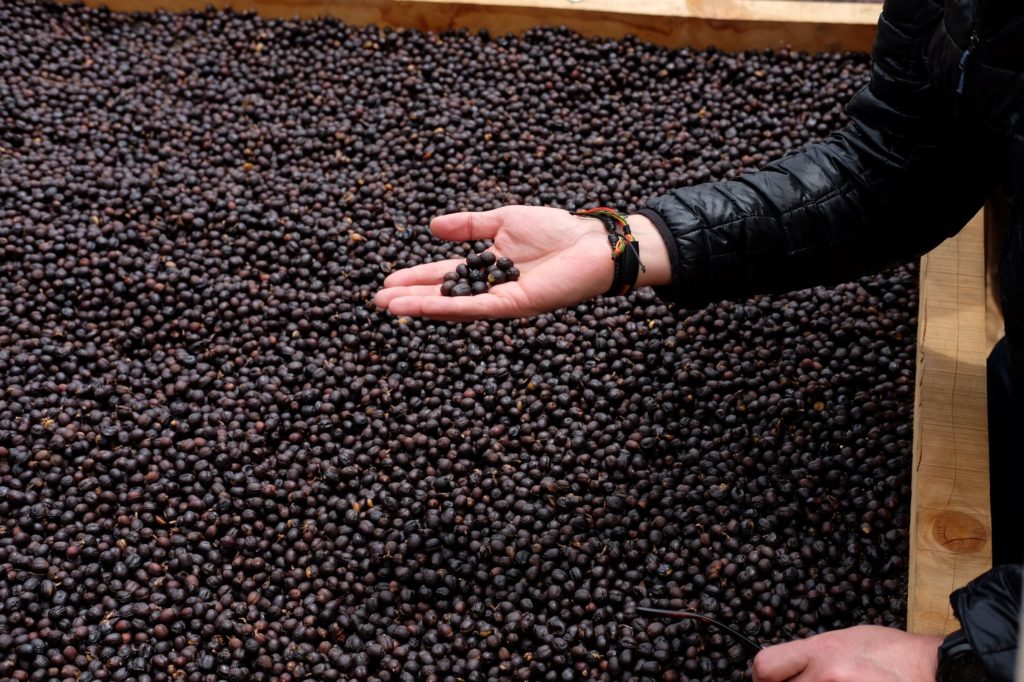 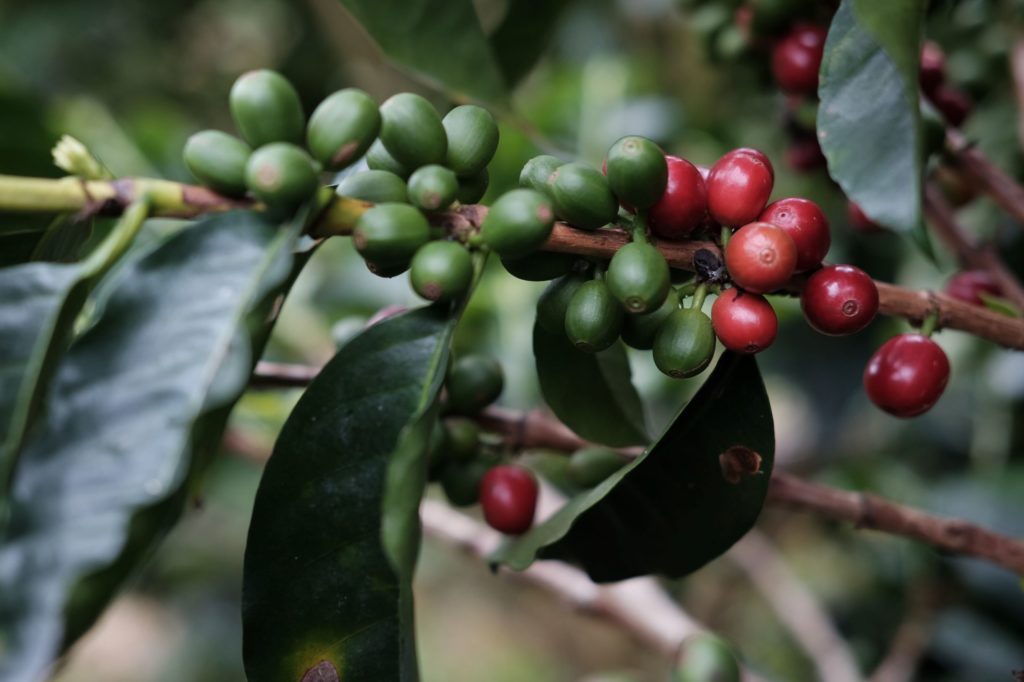 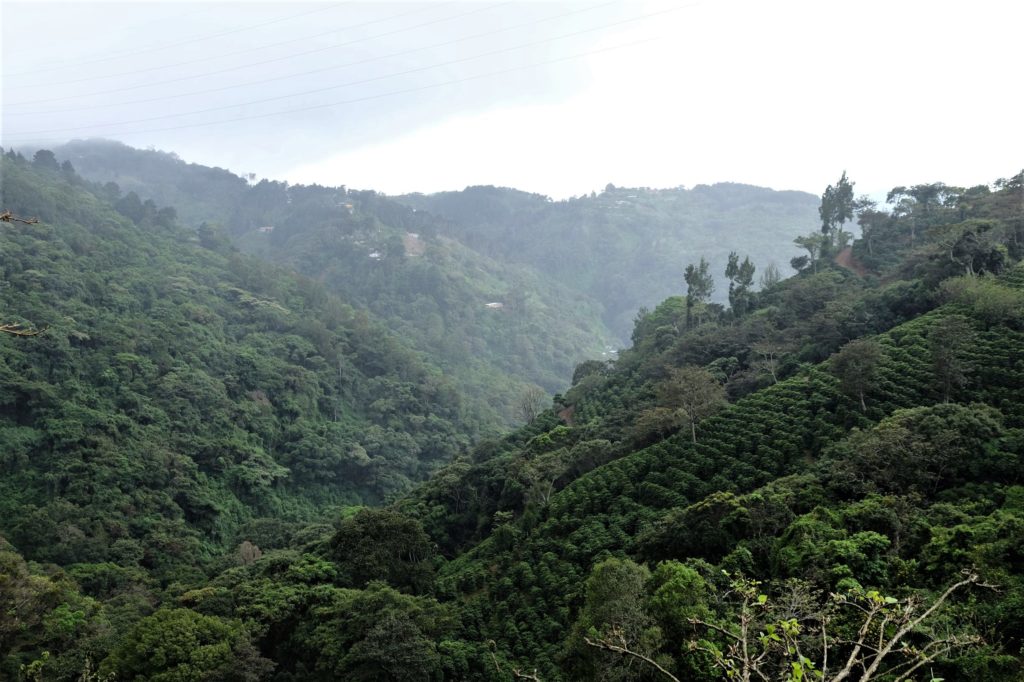 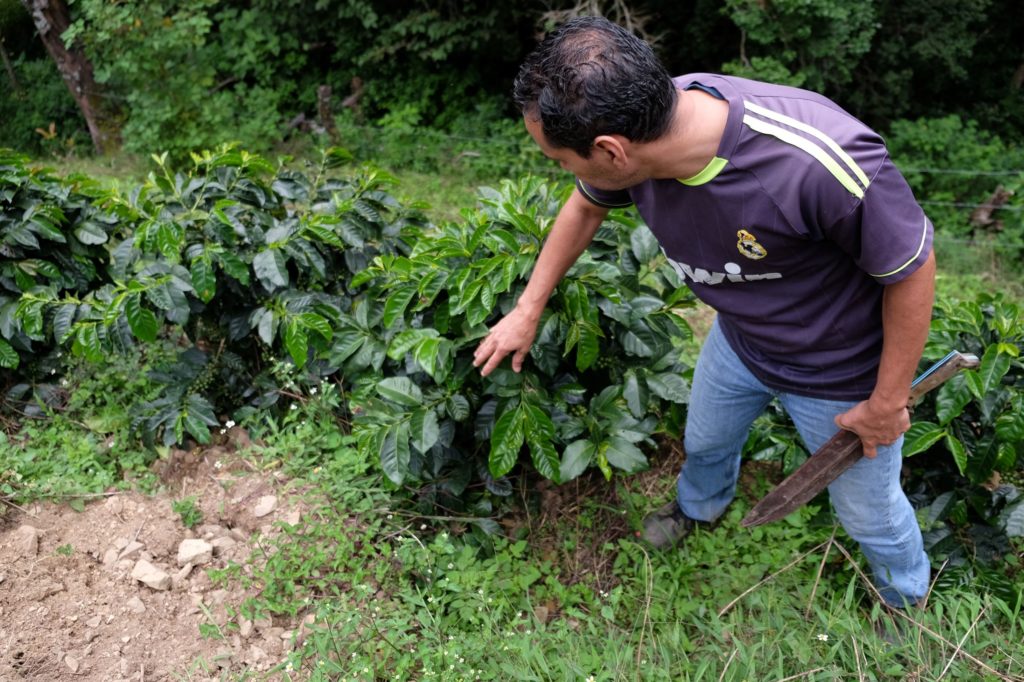 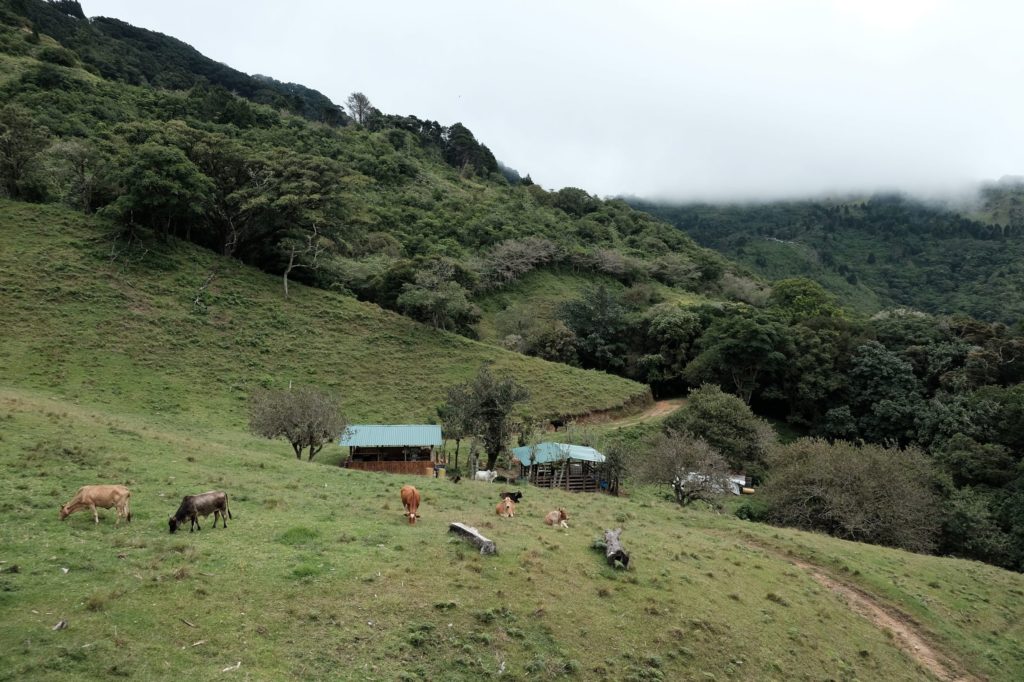 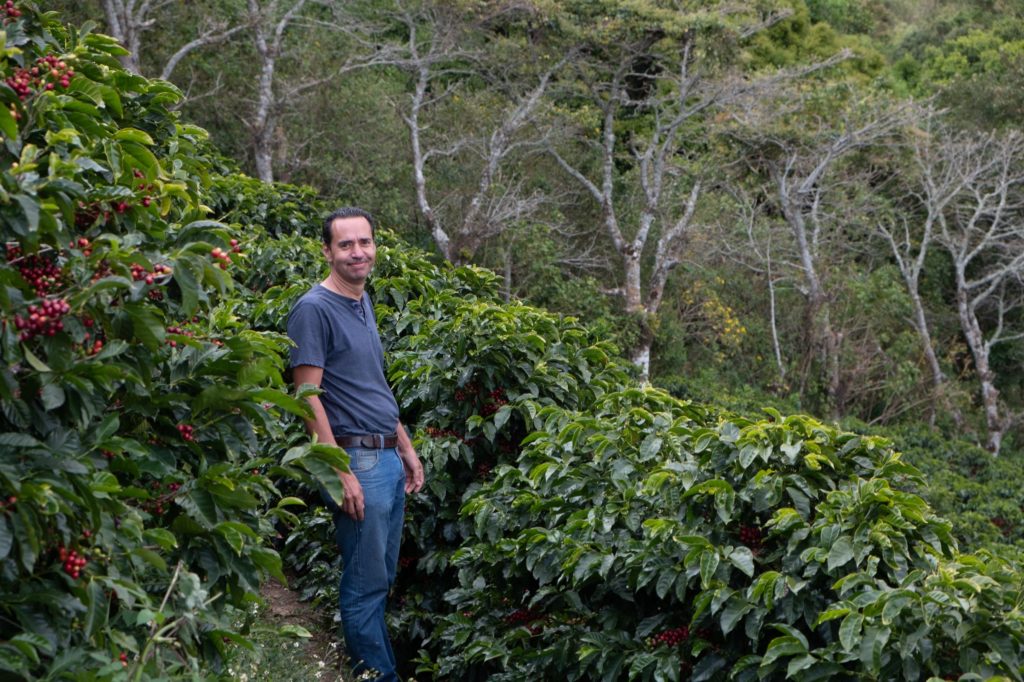 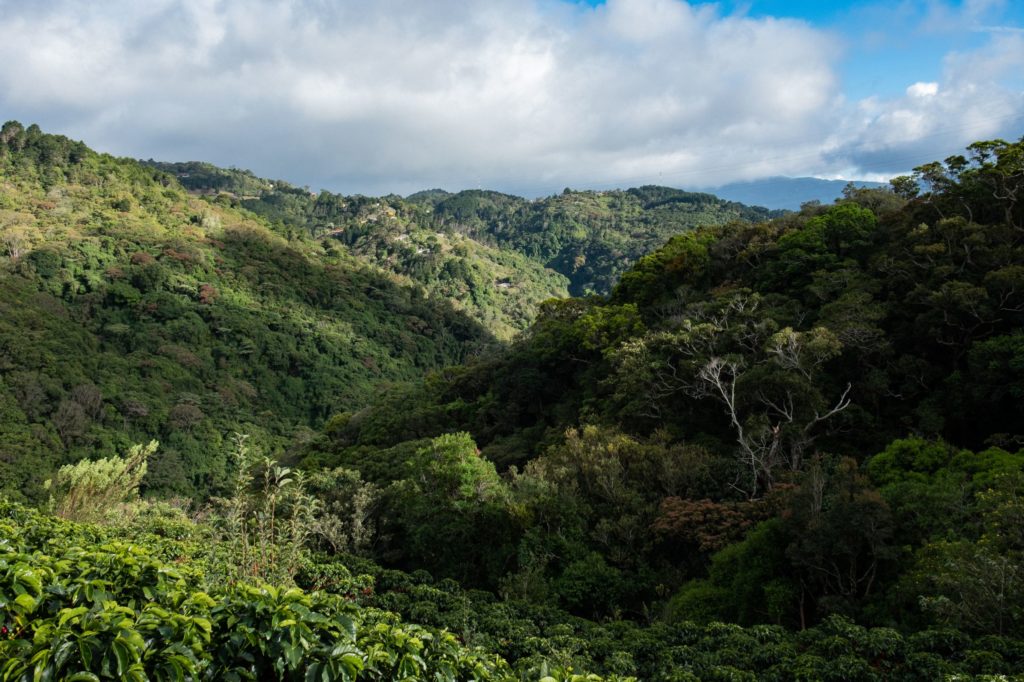 Coffee planted along the edge of the preserved forest

Central Valley is where coffee cultivation began in Costa Rica in 1820 and while the area around the capital of San Jose and neighboring cities Alajuela and Heredia is mostly urbanized, there are still thriving coffee farms on the outskirts of the busy cities. Coffee was Costa Rica’s principal export crop through the nineteenth into the twentieth century. Today pineapple, bananas, and root crops like yuca make up the bulk of the country’s exports, but coffee remains an essential part of Costa Rica’s history and nowhere more so than in the Central Valley.

The Central Valley, Valle Central in Spanish, is a plateau in central Costa Rica. The land in the valley is a relative plain surrounded by several mountains and volcanoes of the Central Range, including Volcan Irazú. The region is home to almost three quarters of Costa Rica’s population and includes the capital and most populous city, San José. The land in the Central Valley is distributed between the provinces of Alajuela, Heredia, San José and Cartago. The region occupies an area of 11,366 km², more than a fifth of the country, and is drained by the Tárcoles River. Farms in Central Valley are comparatively accessible but recognized for growing and processing Arabica coffees with the bright acidity and complex fruit flavors Costa Rican coffee is known for. 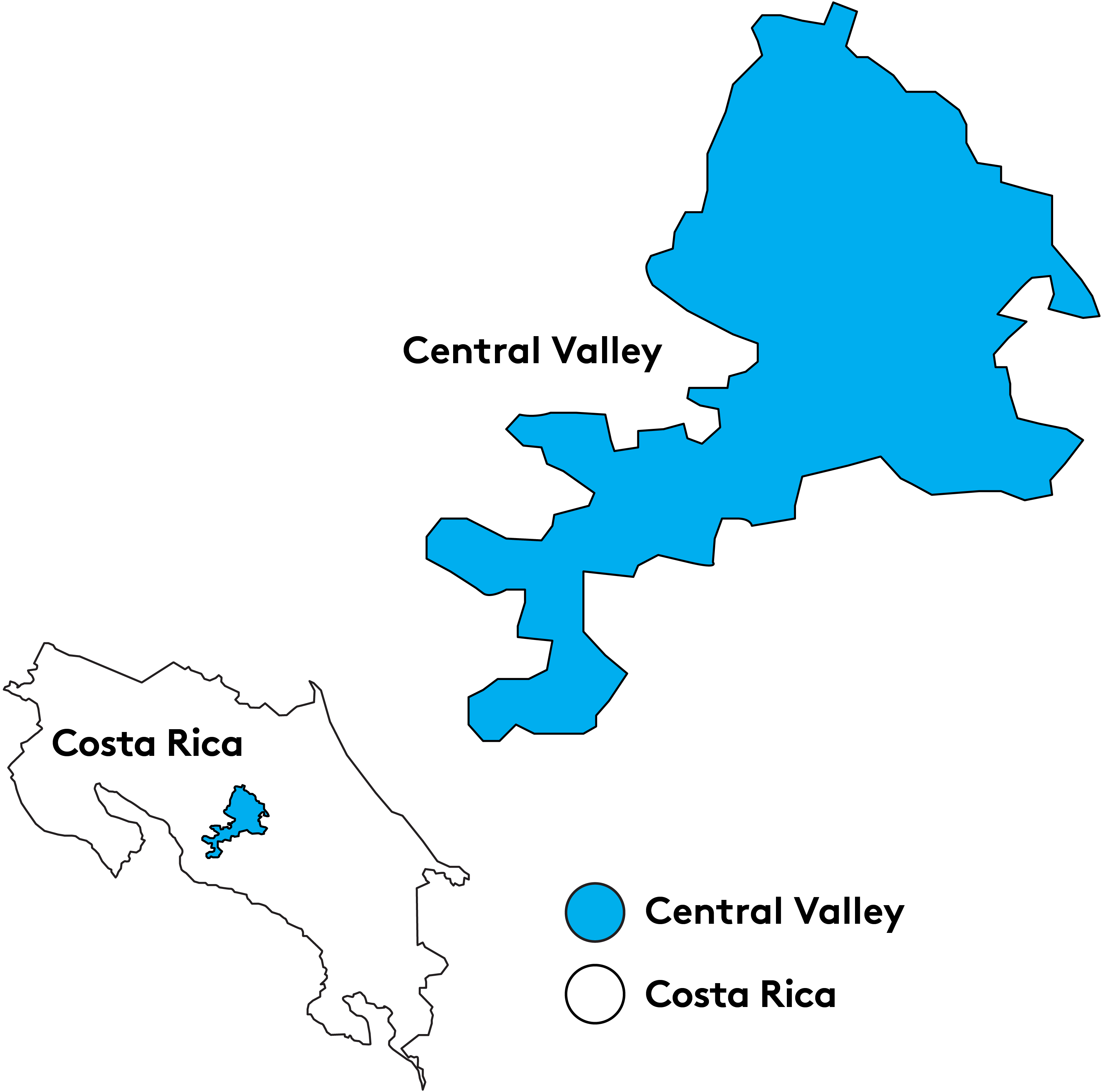